Senate Republicans narrowly passed SB 609, which would automatically raise every county’s property tax levy to the statutory maximum, and cut the state school aid funding by the amount raised.

How much will your county lose? 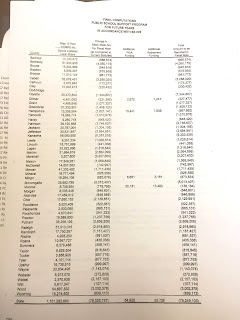 The move is a shell game to plug the state’s budget deficit — to the tune of $79.3 million - by forcing local county boards of education take the heat for the huge tax increase. The bill gives counties the option to roll back the levy, but doing so would not restore the state cuts, leaving mammoth holes in local county and BOE budgets.

The measure narrowly passed, 17-16.  How did your Senator vote? 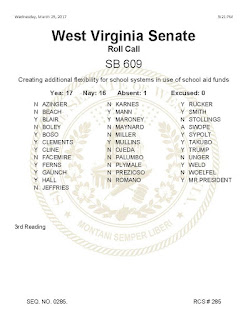 “We’re voting an 18 percent increase on taxes,” said Senator Robert Plymale, D-Wayne. “I just want to make sure we understand we are voting on a tax increase in this bill.”

Republican supporters struggled to admit that the bill was a tax increase. Asked by Sen. John Unger, D-Berkeley, if the bill increased taxes, Sen. Ryan Ferns, R-Ohio, said, “I think it does to the extent that the board of education doesn’t opt to lower that rate down.”

“The money raised by the school levy stays, every dollar, with the county board of education,” insisted Sen. Charles Trump, R-Morgan. “It does affect, in an inverse way, the amount of money that the school aid formula suggests that we provide to school boards.”  The increase in property taxes will fall hardest on the shoulders of our senior citizens and lower income families.

Well, ok then.  Sounds like a tax increase to us.

We appreciate and welcome your comments, which will be displayed after approval. Thank you for reading!